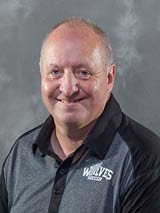 In his first season with the Wolves, Morgan guided the women’s team to a provincial silver medal spot and a berth at Nationals in Montreal for the first time in the program’s history. Morgan also guided the Wolves Boys U18 Soccer Cub to a provincial title in Calgary. This success was recognised with Morgan winning the ACAC Coach of the Year award for 2016-17. The following season, 2018-19, Morgan went a step further by guiding the Wolves women to their first provincial Championship crown and a subsequent berth at Nationals in Halifax.

Before immigrating to Canada, Morgan spent over 10 years coaching at Carryduff Colts Soccer Club where he helped develop several underage teams and guided the senior team to a Newcastle and District League Championship in their first year at the senior level.

Morgan was on the books of Cliftonville FC in Belfast, a semi-pro team and saw out his final playing days with amateur league clubs Ballynahinch Olympic FC and Tollymore Utd FC winning both the Harry Clarke cup and Newcastle and District League Championship.