Home > News Releases > News Archives: Nicolas Verdejo: Selling his Harley to get into the Harley-Davidson® program

News Archives: Nicolas Verdejo: Selling his Harley to get into the Harley-Davidson® program 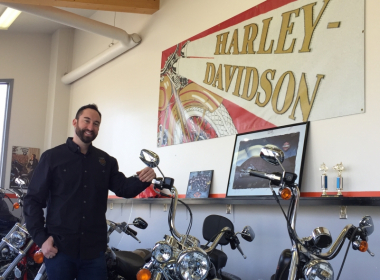 At the age of 33, French-born Nicolas Verdejo is pursuing his dream of being a Harley-Davidson® technician.

While working at a hotel in Brazil, Verdejo found himself dreaming of doing what he loves: working on motorcycles. To his surprise, he found the program that could help him follow his passion in northern Alberta, Canada. Now he is well on his way to fulfilling his dream.

Verdejo was in France and working in real estate when he decided that he wanted to go to the United States and improve his English skills. At the age of 25, he sold everything and did a seven-month internship in San Diego, California.

After his internship concluded Verdejo went to Brazil and lived there for seven years. He worked in a Hilton hotel, beginning as a receptionist, and though he enjoyed it and he loved his team it wasn’t something he was passionate about.

Verdejo always dreamed of being a mechanic and, in particular, working with Harley-Davidsons®.

“I always loved bikes,” said Verdejo. “I love Harley-Davidsons® because of the sensation you feel when you ride the bike, the group of Harley owners, and the fact that you can customize your Harley as much as you like.”

With his decision made, Verdejo began searching for the right program for him to pursue his passion.

It took him nearly a year, but he found GPRC and the Harley-Davidson® program at the Fairview campus. He sent an email and started talking to GPRC International Student Liaison Charlene MacIntyre.

“I exchanged maybe 50 emails with her,” said Verdejo. “Every time I had doubts I’d email her. It was really quick despite the time difference. She explained everything I needed to do and helped me with the paperwork.”

Verdejo needed to pass a Test of English as a Foreign Language (TOEFL) test while he was in Brazil, so he studied hard to ensure his English skills would be at a high enough level. He also prepared himself by watching hours of videos to learn the mechanic terms, tools, and parts in English. Finally, in August he was prepared and all of his paperwork was complete.

Once more Verdejo sold everything, including his first Harley-Davidson®—which he had bought in 2015— and his car. With only two pieces of luggage he enrolled with GPRC and moved to Canada.

“As soon as Nicolas got into class he was ready to learn,” said Carl Ball, GPRC Harley-Davidson® Technician Instructor. “He was always really good about asking questions and making sure he had a clear understanding of what was in front of him before moving forward. His dedication to learning every detail about the bike was incredible to see.”

“I’m really enjoying it,” said Nicolas. “They give you a good base to begin and good knowledge in the fifteen weeks. The books you buy and the sheets they give you will serve you forever whether it be in your career or if you want to work on your own bike.”

To other students considering entering the program, Verdejo said, “If you want to do the program be prepared because it’s really intense. If you don’t have any knowledge of mechanics it would be really hard. Doing my research really helped me.”

Ball doesn’t have a doubt in his mind that Verdejo will make an awesome Harley-Davidson® Technician. “He’s got the passion and now the knowledge. I’m looking forward to seeing where his future takes him.”

Verdejo plans on moving back to Europe or Brazil once he completes his studies at the beginning of June. Wherever he ends up, Verdejo will be doing what he loves – working on Harley-Davidsons®.