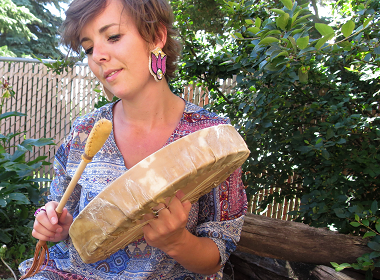 Years after beginning her educational journey at GPRC, Brigitte Benning has returned – this time to complete novel research on Indigenous-based supports for students in post-secondary. The GPRC alumna and successful MA candidate selected her thesis topic after noticing that much of the existing research on Indigenous issues seemed to be asking the wrong questions. “The natural tendency is to ask, what can we do that’s new?” she said. “But I thought there was something already happening here at GPRC that we could learn from.” That “something” was the On-Campus Friendship Centre at GPRC, a communal space where Indigenous and non-Indigenous students can study, socialize, and rejuvenate. Friendship Centres exist in urban centres across Canada, but GPRC remains the only post-secondary institution to host one on-campus. For her thesis, Benning was interested in using the On-Campus Friendship Centre as a case study to answer the question of how post-secondary institutions can best support students from Indigenous backgrounds. According to GPRC Indigenous Liaison Coordinator Kathy Dubé, the Friendship Centre is an invaluable resource for students. “It’s a place where they can feel comfortable,” she said. “A lot of our Indigenous students come from isolated communities. When they are taken from that environment, they can get really homesick.” She added that for some students, becoming detached from their culture can cause emotional distress and social isolation, which can hinder academic success. “The Friendship Centre helps Indigenous students walk in both worlds while meeting cultural and spiritual needs,” Dubé said. “They know it’s totally okay for them to be who they are in that space.” Benning was interested in learning how the On-Campus Friendship Centre was used by students and how it may contribute to student success. The research question was inspired by her own experiences as a student at GPRC. “I would come to the On-Campus Friendship Centre between classes, grab a coffee, talk to the Elder in Residence,” she explained. “I enjoyed the Centre when I went here, and then realized once I moved how important it was.” To answer her research question, Benning used a mixed methods approach, relying on both qualitative and Indigenous research practices. Aside from spending much of her time at the On-Campus Friendship Centre, her research involved conducting one-on-one interviews and a Talking Circle with GPRC students, staff, faculty and community members who were involved with the centre, asking them what was helpful about the resource and what needed improvement.  In the course of her research, Benning realized the danger of using a single metric, like GPA, to measure academic success. “For some people, just showing up to class might be a success,” she said. “Others need to graduate with honours and straight As to feel successful, and some needed to bring their community with them as they journey through post-secondary education. I was interested in finding out what makes students successful according to their own definitions of the word.” She found that students used the Centre for a variety of reasons. Reconnection with culture and community was among them, but some students also just liked the convenience of using the room’s printers, computers, and atmosphere. Overall, she found the space was prominently used for meeting other students and forming a sub-community within the College. Throughout her research, Benning also heard several suggestions for improvement of the supports such as the implementation of a smudge room, a larger space to accommodate more students, and a stronger presence of the Circle of Indigenous Students in the College. These suggestions fit well with the Truth and Reconciliation Calls to Action for all post-secondary institutions – something Benning is passionate about. Benning plans to share her findings with the community, but not before she takes the time to thank her participants and bring them up-to-date. “I’ll be hosting a Giveaway Feast where I invite all the participants,” she said. “I’ll let them know, here’s what I did with your stories, these are the quotes I shared, and here’s where you can find my thesis.” It is important to Benning that her participants stay involved with the research process even after the interviews are over. The Giveaway Feast is part of her philosophy of doing research “with” rather than “on” Indigenous people. “It’s an essential step,” she said, “but too often one that is left out.” Benning hopes her findings can be used to support Indigenization efforts at GPRC and other Canadian post-secondary institutions. She thanks the On-Campus Friendship Centre and Grande Prairie Friendship Centre for their participation, as well as the Research and Innovation department at GPRC for their resources and support. More about her research: https://www.gprc.ab.ca/news/display.html?ID=1150