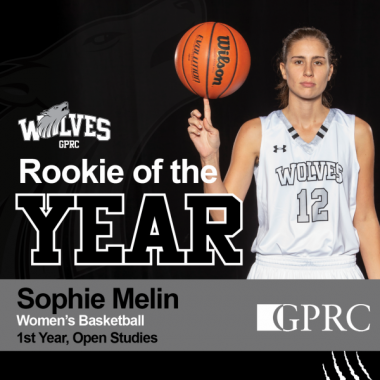 Head Coach Mandy Botham’s summary of Melin’s performance in her rookie season speaks volumes to her character and talent as an athlete, “I’m immensely proud of Sophie for receiving this award. Not only is she a skilled and dynamic forward on the court, she is strong academically and a natural leader who brings confidence and composure to our young team.”

Melin, who is in Open Studies at GPRC had a breakthrough season with the Wolves recording a team high 11.6 points per game average. With 115 defensive rebounds (11th in ACAC) and averaging 1.0 blocked shots per game (4th in ACAC) she has made her mark on the conference as a legitimate threat in the key.