News Archives: The Heart of the Nursing Program 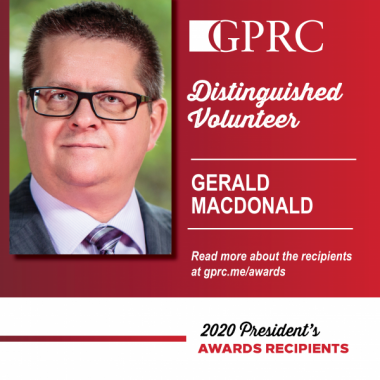 Registered nurse Jerry Macdonald is being honoured for his volunteer work with GPRC students. He’s already enjoyed the reward of learning from them.

Macdonald is an active volunteer supporter of GPRC through dedicated teaching and mentoring of its nursing students.

When he discovered he was being recognized with the 2020 Distinguished Volunteer Award, he thought it was a mistake.

The Distinguished Volunteer award recognizes exceptional contributions of time and energy dedicated to the advancement of GPRC.

Macdonald moved to Grande Prairie in 1988 with a nursing diploma from the Halifax Infirmary School of Nursing.

He came to know the College’s nursing faculty while employed in the QEII Hospital’s Intensive Care Unit and began acting as a preceptor, mentoring students during their education placements.

“I’ve felt a commitment to work with the College and the nursing faculty to try and bring on that new generation of nurses to obtain the strongest clinical skills they can,” he said.
Macdonald was also invited to give presentations on cardiac nursing.

“It was old school,” he said. “I would go over there with my little pack of transparencies and ask them to book an overhead projector. That was before I learned how to use PowerPoint.”

Macdonald has since supported GPRC students through mentoring and teaching for more than 10 years.

Students complete their college education with excitement after having spent time with Macdonald. He believes the effect is mutual.

“One of the things that are so interesting about working with students is that I learn as much as they do,” he said. “I learn from their enthusiasm, their original perspective on issues and their questions.”

In 2006, Macdonald stepped into his current role as a Cardiac Rehabilitation Nurse Educator. Deciding to earn a Bachelor of Science in Nursing, he worked full-time and studied part-time, earning his degree through GPRC and the University of Alberta from 2006-2010. He then expanded his horizons even further and earned a Masters of Nursing degree.

“I’m a restless intellect. I always want to try to learn something new and to have new experiences. The day-to-day is rewarding, but I like to stretch myself.”

“It’s an opportunity to show them a different kind of nursing that’s not in a hospital with a patient in a bed. It’s a community-focused program where there’s a need to develop behaviour change, health coaching, assessment and interpersonal skills.”

Macdonald has taken his passion for volunteering to the provincial and national levels. From 2010-2014, he was a council member representative for the Northwest on CARNA (College and Association of Registered Nurses of Alberta) and president from 2016-2018.
While president, he held the national position as the Alberta representative on the Board of Directors of the Canadian Nurses Association. Macdonald is proud of the progress which occurred during that time.

This year, GPRC recognizes Macdonald for his outstanding contributions to the heart of the nursing program.

“I’m tremendously honoured, and tremendously pleased and flabbergasted beyond words to be receiving this recognition.”