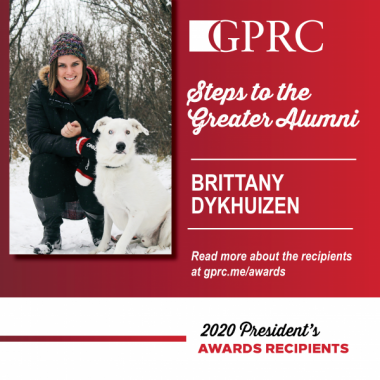 Being a nurse is in Brittany Dykhuizen’s genes. Now she’s ensuring those following in her footsteps are equipped for success.

Dykhuizen is the 2020 Steps to Greater Award recipient. The award recognizes the outstanding achievements of GPRC alumni early in their careers or community service.

Having earned her Bachelor of Science in Nursing degree in 2012, she volunteers as a preceptor for fourth year students at GPRC while working in the Neonatal Intensive Care Unit (NICU) at the Queen Elizabeth II Hospital.

“It’s an honour to be recognized for that work and effort,” she says. “Hopefully I can pass down what I am doing to nurses that are just coming out of school now.”

She says her training at GPRC and early working years have shown her the difference good preceptorship and mentorship can make for an up-and-coming nurse and she wants to make sure young nurses move into the profession with a great experience.

“It’s important to foster that relationship and help people through the early stage of their careers,” Dykhuizen says. “It can make a huge difference on what they decide to do long-term.”

She’s found great satisfaction and rewards working in the NICU.

“I genuinely enjoy the work, helping people and seeing the progress you can make over the course of even three days with a patient,” she says. “It’s instant gratification witnessing parents becoming more confident and competent with their sick or premature baby.”

In addition to volunteering with GPRC, Dykhuizen is involved in initiatives aimed at improvements in the workplace.

She’s part of the NICU Practice Council which review activity within the unit to determine if there are ways of refining processes and procedures for staff and potentially bettering patient outcomes.

“We have gone through and changed our charting documents to improve them, making them a little more user friendly and pertinent to what we are doing,” she says.

"We’re also working on having the parents more involved in their baby’s care, what that looks like from a nursing standpoint – how hands-on we are versus stepping back and taking a more supportive role and empowering parents to be more independent in caring for their newborns.”

Some families can have babies in the NICU for as many as four months so the goal is to make their transition home as smooth as possible.

She’s thankful for the training she received at GPRC – particularly the amount of research and clinical time required.

Dykhuizen says the instructors at GPRC were a key to her success.

“All of the instructors really go out of their way to help the students as much as they can and promote a positive learning environment,” she says.

Dykhuizen initially planned to be an x-ray technician. She determined that nursing would provide a broad range of opportunities. As well, her mother is a nurse, so she had familiarity with the profession.

“I always knew I would be in health care. I just didn’t know the area. Once I started exploring, I realized with nursing, you can pretty much work anywhere and do anything you want. It opens up a huge opportunites if you want to travel and work, if you want to work in an office, or at a bedside.”