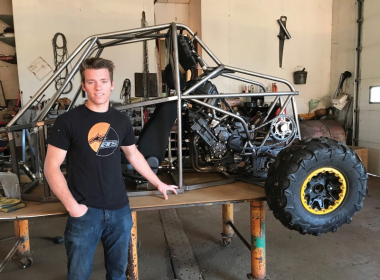 In his pursuit of a mechanical engineering degree, Linden Boulet has finished his first year at GPRC with remarkable success and has been honoured with a number of awards for his hard work and dedication to his studies.

GPRC was always in the plan for Boulet. His grandfather Paul Lemay taught at the College as a charter instructor when it first opened its doors in 1966, and Boulet’s older brother, Reid, attended the College just a couple of years ago.

“I always knew I was going to go to GPRC,” said Boulet. “Especially because it’s close to home and it’s in our family, so it’s definitely a good place to start my education.”

Boulet’s family owns a farm just north of Grande Prairie where Boulet grew up. Attending GPRC allowed Boulet to go home and have dinner with his family in the evening and to study and unwind in an environment he was used to.

“It makes a big difference not having to disrupt my routine too much while going to school,” said Boulet. “Plus, it allowed me to continue to work on projects that I’m passionate about – like right now I am building my own dune buggy from scratch.”

His acceptance into GPRC exceeded the plan when he received the President’s Scholarship Award which covered his first year’s tuition.

“The Award was based on high school marks. It was really good to know that all my hard work paid off and it took some stress off knowing that my first year tuition was covered,” said Boulet.

Boulet completed his first year in engineering at GPRC with a 3.8 GPA and received more awards to wrap up his incredible first year of college.

“Receiving the President’s Scholarship Award really kept my motivation to continue to work hard and remind myself that I’ll get out what I put in,” said Boulet.

He was chosen by his instructors to receive the ATCO Electric Award and he also received four other year-end awards: the Erco Chemistry Award, the Alliance Pipeline Scholarship, the Dale Bekevich Memorial Scholarship, and the Henry Popek Memorial Award.

Boulet also mentioned that while receiving some of his year-end awards he was able to meet and shake the hands of engineers working in the field. “It was really awesome for networking and asking questions about what work is available in the Peace Region.”

In order to continue his engineering degree, Boulet will continue his studies at the University of Alberta, where his brother is already studying dentistry.

Once he finishes his studies, Boulet plans to return to the Peace Region to work. “This is home,” said Boulet. “I know that the industry is really booming here. I am also interested in learning more about the mechanical aspects of the oilfield.”

To high school students entering their last year, Boulet would say, “I think the number one thing is to enjoy high school while it lasts, but also remember you’re setting up your foundation for your future. You need to study and put the work in.”

He added, “You do also need to take time to go and relax. You can get caught up in studying and get overwhelmed. Go have some fun too. Friday evening and Saturday were study, study, study for me. And Sunday I took off. It helped cap the week well and kept me motivated to keep going.”

Boulet is looking forward to continuing his education in the fall but in the meantime, he’s just enjoying his summer, life on the farm and working on completing his dune buggy.

Learn more about the President's Scholarship Award and how to apply.