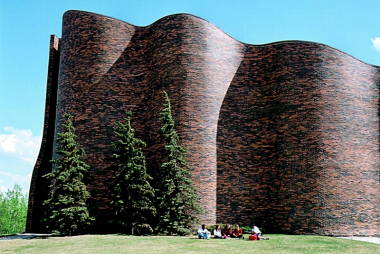 The Royal Architectural Institute of Canada (RAIC) has announced Grande Prairie Regional College and Massey College to be the recipients of its 2013 awards Prix du XXe Siècle award.
A news item posted on Canadian Architect today explains the selection: "Grande Prairie Regional College (1974) is an early representative work of Douglas Cardinal, FRAIC. When it opened, it was one of only three Canadian post-secondary institutions north of 55 degrees latitude. Cardinal - a young, maverick architect at the time - blended his structure into the landscape, to achieve a striking aesthetic, both outside and inside.
Today, this instantly recognizable structure is a place where people come together to learn, create, and celebrate culture. "According to the jury, Cardinal helped build a sense of community in Northern Alberta: 'His highly individual approach shaped a building that has become a regional landmark. It is valued highly by the College as a working environment and an embodiment of a distinctive understanding of place and people.'"
This award recognizes the enduring excellence of nationally significant architecture such as landmark buildings in the context of Canadian Architecture. GPRC is exceptionally proud that the Cardinal building on its Grande Prairie campus has been recognized by RAIC and by the Heritage Canada Foundation.
The extensive nomination was prepared by Dr. Daryl White, a GPRC history instructor who has a great personal appreciation for the building. "I attended two universities where everything was right angles and long, straight corridors and GPRC was so different when I got here," White says. "Walking to work through the park, I regularly admire the building from a distance across the reservoir, and I know many of my colleagues have the same appreciation. When this call for nominations came out, it seemed a great opportunity to get national recognition for our local treasure."
The award will be presented on June 7 at the annual Festival of Architecture, to be held this year in Halifax. The Festival focuses on architects' contributions to the improvement of today's world, the built environment, sustainable urban development and social commitment, as well as the importance of architecture.
Carmen Haakstad, Vice-President External Relations will be accepting the plaque on behalf of GPRC, and an installation ceremony will later be held at the College. "We are grateful to the visionaries of our community who were brave enough to bring the young Douglas Cardinal to this project," says Haakstad. "They built this icon of Canadian architecture in a part of the world where function is typically more important than form. Generations of our citizens have benefitted already from their decision, which at the time was difficult, expensive, and frequently questioned. The dreams of that Board, and the brilliance of Douglas Cardinal, are a daily source of inspiration in our College and our community."
Don Gnatiuk, President and CEO, says that GPRC is keenly aware of the significance of its Cardinal architecture, and the importance of preserving the integrity of the building's design during repairs and renovations. "This building has an indelible visual and emotional impact. I remember the first time I saw it driving past a couple of decades ago - and I was very aware of the beauty of this campus when I applied for the Presidency of GPRC in 2007. We are exceptionally proud to be working in this Cardinal building, and to be stewards of it for our community. We extend heartfelt thanks and congratulations to Douglas Cardinal for this award."